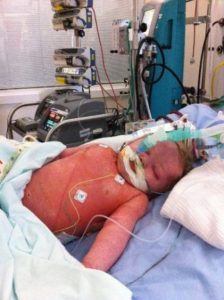 My brother-in-law’s family have two young boys, and the youngest, Freddie, was a toddler when he was diagnosed with Pneumonia. One Friday evening, my wife told me that Freddie had just 1 hour to survive before the urgent arrival of an ECMO machine from Leicester, and that he was very seriously ill. I knew straight away that God was moving me to pray for him, so I went upstairs to pray. It felt like a very bad situation and I sensed that this Pneumonia had a deathly grip on him. God laid Freddie heavily on my heart and I felt deeply moved for him, getting angry with the Pneumonia and commanding it to get its deathly hand off him in the name of Jesus. I was upstairs for an hour engaged in an emotional prayer time, knowing that I had a special role in praying for his survival and healing. It might sound strange but as I prayed, I blew out many long breaths for him, blowing God’s living Holy Spirit into his lungs and body. I have never done this before, but it literally felt like I was giving him the kiss of life. I also prayed that his parents would have real peace and comfort, that the consultant would have wisdom on what to do, and that the ECMO machine would work properly.

After this time of prayer, I just knew that the Pneumonia no longer had a grip on him. He was still seriously ill, but he wasn’t going to die from this Pneumonia. After such a moving experience in prayer, God surely had more plans to complete the work and this greatly encouraged me.

I could also sense an angel travelling in the ambulance with him, ministering to him. I had only once before sensed the presence of an angel so I felt very comforted that God was going with him to Leicester.

Saturday 4am: I woke up and whispered to my wife Sarah that I thought I should go downstairs and just pray to see if God had any more for me to do for Freddie. I had one of the most powerful prayer times of my life, so moving and emotional. God gave me Freddie’s lungs to hold, one in each closed hand. I prayed for them, squeezing them gently to pump air into them. I blew with my mouth into each closed hand, powerful breaths of God’s oxygen. This was especially for the lung in my left hand (Freddie’s right lung). All this felt so real, I just knew it was actually happening. I also prayed for his other vital organs – heart, kidneys, and liver. I found out some time afterwards that his lungs had collapsed (one fully, the other half) and crystallised, and that his organs had also shut down completely.

As I prayed it felt powerful to say ‘I am the resurrection and the life’ – words said by Jesus before his death and resurrection. Every time I said it, it increased my faith to believe that Jesus can indeed resurrect people physically, and this made me cry and rejoice at the same time. There is no distance in prayer, and this felt like I was there with Freddie in real-time. I kept saying ‘come on Freddie’ because I felt so close to him and stood with him in what he was going through. I also sensed the same angel at his bedside in Leicester, which meant God was with Freddie in a very special way.

Saturday lunchtime: I still felt such a strong authority to bring Freddie healing in Jesus’ name, so I spent another hour upstairs praying. I was simply told that he had a virus (and afterwards found out that this was called Streptococcal A that had led to Septicaemia). This had significantly damaged his capillaries and he couldn’t hold the white blood cells – they were leaking into various cavities in his body. They were going to switch the ECMO machine off if he didn’t start to retain these white blood cells, this is how serious it was. I googled ‘capillaries’ and it said ‘tiny veins, so small the eye can’t see them – there are 50,000 miles of capillaries in the human body’. As I prayed I saw an amazing thing in my mind’s eye – God’s provision of new blood soaking down from his head through his body, slowly filling all the weak veins and capillaries, healing every one on the way. It took 4-5 days to soak down to his waist, and every time I looked at this picture in my mind’s eye, the blood had moved down a little bit more. When it had passed his waist, the news came that he had a bowel movement, then later a wee. Amazing news that made me laugh and cry. I kept saying, with much joy: ‘the kingdom of God has come to you, Freddie’ with all its blessings of wholeness and healing.

From his parents’ point of view, it was day 6 when the bags that were collecting the leaking fluid were taking longer to fill, which meant that his capillaries were doing their job. Incredibly, the consultant was still saying to expect the worst, which really stirred me to push on in prayer and see that Freddie would be fully healed by God. He was still in a coma and on a life support machine. As I prayed I used the verse in the Bible in Luke 11 that Jesus said:

‘if you want to beat the strongman, first tie him up and then you can rob him of his possessions’

I have used this powerful verse a few times to help me successfully pray for my daughter Livvy (who has Cystic Fibrosis), to kill off bacteria that was harming her lungs, so I knew it’s truth had power. The strongman was Septicaemia, and I bound it up, as if I was tying it up with God’s own ropes, so that it was powerless to act. Then I robbed it of its damaging poison and of its’ actual name, Septicaemia. To rob a virus of its’ name is one of the most powerful things I have done. This virus was now just some nameless and harmless thing flowing around his body, and without its poison and name, it was useless and defeated. I was full of joy at this victory!

During these few days there were also times when I felt fearful that something might go wrong, and, given how God had attached me to his cause with a deep sense of love for Freddie, how difficult and heartbreaking this would be to cope with. That’s when I just had to commit Freddie to God’s care and ask Him to look after him when I wasn’t praying for him.

Tuesday: Great news by text at 8am – Freddie is now taking 10 breaths a minute, he’s opened his eyes, and his bowels are working better. I was overcome with tears of joy in the car park at work where I got the text! At this point, his parents also discovered the final miracle: his brain function was also untouched.

I continued to pray for full healing with no lasting damage. I wanted God to finish the job properly, and Freddie made a full recovery very soon after the ordeal. He is now a healthy and lively young boy.

Freddie’s recovery shows the true power of Jesus to bring His resurrection life into a dark and desperate situation. My faith in God and his desire to use normal people like me has been changed forever. It just shows what miraculous things we can achieve with God’s leading and almighty power when we make ourselves available in prayer. He gives us his love and compassion to bring his healing into peoples’ lives. Thank you God.