Livvy contracted a very serious infection called ‘Pseudamonas’, and I used some powerful verses in the Bible to help me pray against it:

Jesus said in Luke 11:21-22 – ‘A strongman guards his possessions, but when someone more powerful than he comes, he ties up the strongman and robs him of his possessions, then divides up the spoils’. The Pseudamonas bacteria was a strongman, difficult to defeat with medicine. As a Christian God has given me more power and I can rob it of its authority as an illness. I applied this truth in prayer, then tied up the infection with God’s strong rope so that it was defenceless and exposed, powerless to stop me. I took away its right to live in Livvy and its ability to damage her lungs. 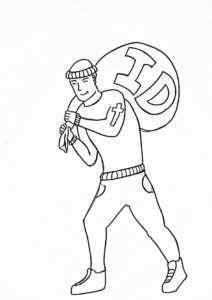 Then I robbed it of its name Pseudamonas, which was one of the best victories I have ever had. To take away its identity is to have total victory over it. With God’s backing, I prayed something like this: ‘I am a Christian and I have the authority in Jesus Christ to rob you of your name – I take it away right now so that you have no identity, you are now nameless, and therefore defeated.’

This prayer battle was such an enjoyable and definitive victory, proven by 3 clear cough swabs at the hospital. I learnt that God gives every Christian his authority to stand against and defeat illnesses – we just have to walk with him and work with him, and he goes with us into battle.